Getting to the Root of the Problem 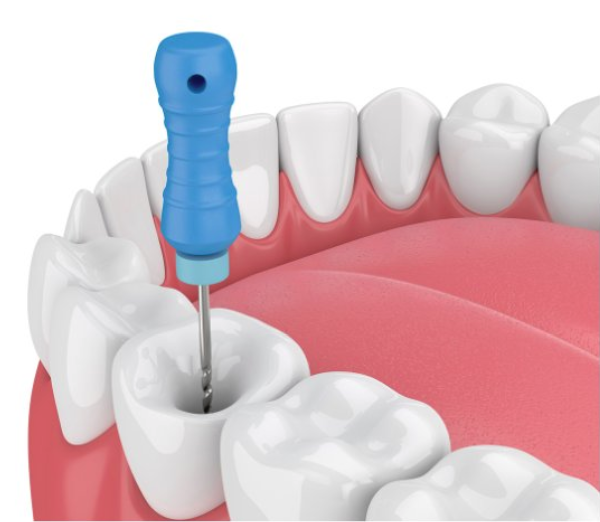 Often, when family members are discussing a problem in their life, they use a saying like, “It could be worse; at least it’s not a root canal.” But the analogy to root canal treatment is not an accurate one. Having a root canal is the way a dentist or endodontist (who is a specialist in performing root canal treatment) treats a tooth with a problem, whether it’s a tooth that has an infection or one that has decay or a cavity that gets into the pulp.

Our teeth have basically two layers, enamel on the outside and dentin on the inside. Within the dentin, there is the pulp, which gives a tooth life. The pulp contains blood vessels, nerve supply and collagen. It enters the tooth at the end of the root.

When the pulp is affected by decay entering it or by fracture into it, there is inflammation and pain associated with it (pulpitis). Often, if this condition is left untreated, pressure builds up at the end of the root and beyond, resulting in an infection and swelling.

In order to relieve this pressure, root canal treatment is initiated by opening up the tooth through the chewing surface or crown. The interior of the tooth (canal) where the pulp is located is cleaned out with a series of files, and when the infection is gone, the canal is filled with a type of rubber (gutta percha) and cement – often followed by a filling or post and crown to seal the tooth and rebuild its core and strength.

Importantly, this treatment saves teeth and should allow them to function and look good for years to come. Not unlike a hip replacement, where the bone is replaced by a metal rod and joint, the root canal can actually allow the tooth to be strengthened with this new “core.”

Rather than think of the root canal as being a problem, root canal treatment can be thought of as a solution which eliminates pain and infection. It also preserves our natural teeth, unlike a dental implant, which needs to be seen as a last alternative to having our own.

Whether we’re talking about our families – ancestors, close relatives, or children and grandchildren – or teeth, it’s nice to have roots!

This article originally appeared in the July/August 2019 issue of Northeast Ohio Boomer and Beyond.

Dr. Steve Marsh was born and raised in Cleveland, and has over 40 years of experience in dentistry. Nationally and internationally, he is the Immediate Past International President of the Alpha Omega International Dental Fraternity, is a member of the American Academy of Cosmetic Dentistry, and is a fellow of the International Academy for Dental Facial Esthetics.