An Easy Fix for a “Gummy” Smile

Home/Uncategorized/An Easy Fix for a “Gummy” Smile
Previous Next

An Easy Fix for a “Gummy” Smile

Over the past few months, we’ve seen a number of new patients who have wanted their gums “raised” or changed. In some cases, they’ve always had a “gummy” smile, while others noted that it occurred after having braces, which often “encourages” the tissue to cover over part of the teeth. A few people have said that they’ve noticed it on other people during Zoom calls, while some said they became conscious of it during their time on the internet. In all of these instances, their teeth look shorter because of it.

As we have noted on our website and on a previous blog, gum contouring or gum lift is quickly and easily accomplished using a diode laser. We have used one in our office at ClevelandSmiles for over fifteen years, and last month purchased the latest model, which is faster and even more predictable. Often just using a topical anesthetic or a minimum of conventional anesthetic, the laser allows us to idealize the height of the tissue, exposing the crown of the tooth to the optimal size. A recent patient noted in a letter to us, “I can’t believe it was so easy; I should have done it years ago!”

If you would like to see how it works, would like a consultation – including a digital image of what it can accomplish in your own mouth, or just want to go ahead with the care, call Karin or Alysia at 440-461-1003, and they’ll be glad to assist you with an appointment! 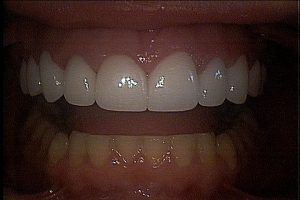 Dr. Steve Marsh was born and raised in Cleveland, and has over 40 years of experience in dentistry. Nationally and internationally, he is the Immediate Past International President of the Alpha Omega International Dental Fraternity, is a member of the American Academy of Cosmetic Dentistry, and is a fellow of the International Academy for Dental Facial Esthetics.